Skip to content
Homepage / Dying Light 2 / Dying Light 2 Beginner's Guide: How to Unlock Co-op, Fix Weapons and Invite Friends
Dying Light 2 is finally here, and with 500 hours of open-world content, there’s plenty to see and do.

When you open the map, you’ll find that it’s filled with tons of activities usually reserved for games like Far Cry or Assassin’s Creed. Among other things, you have to climb windmills, find inhibitors, free neighborhoods and unlock hiding places. 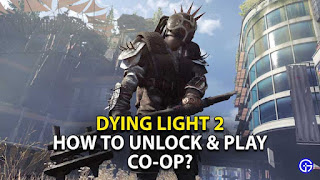 There’s obviously a path you can follow, but along the way you’ll inevitably get sidetracked by some of these optional missions, and you might even have to do a few to improve your combat skills.

In short, while it’s possible to just skim Dying Light 2’s campaign (and even a bit tempting considering how many other massive blockbusters are on the way), we wouldn’t recommend it. Not only do you miss out on a lot of entertaining content, you also make things unnecessarily difficult for yourself.

Technically, you can’t repair degradable items in Dying Light 2, but it’s possible to at least extend their lifespan.

When you install mods on a weapon (to change its stats or give it elemental damage), you also buff it as a nice little bonus. This is displayed on the right side of the crafting menu where you can see the durability bar for anything you upgrade. This will be filled by about 20% every time you install a mod.

The downside is that you can only upgrade each weapon a certain number of times (three to be exact) before all upgrade slots have been used. As such, you will eventually run out of ways to repair your gear and it will wear out.

Much like The Legend of Zelda: Breath of the Wild, this will likely encourage you to experiment with different loadouts throughout the game and not rely too heavily on one weapon.
How to fast travel in Dying Light 2 The picture shows the infected in Dying Light 2. You need to clear the subway stations of these enemies if you want to unlock fast travel. Square Enix

Given the size of the zombie-infested world, you’ll be happy to know that Dying Light 2 has a fast travel system. There’s a fun in-universe explanation of how this works, because you’re basically using subway tunnels to get around (a similar concept was used in the We Happy Few game).

Of course, Aiden can’t materialize anywhere on the map without doing some legwork first. Infected and bandits have taken up residence in the various subway stations around Old Villedor, so you’ll need to eliminate them if you want safe passage.

Once you’ve made your way through the dungeon environment, you’ll need to complete a small traversal challenge (often against the clock) to activate the generator at the subway station.

If you can do all this, then it will be accessible as a fast travel point in the future. To actually use this feature, open your map and hover over the subway tunnel icon. This will bring up a prompt asking you to hold down a context key (square for PlayStation users).

When will co-op unlock in Dying Light 2? The picture shows the gameplay of Dying Light 2. After completing some story missions, you can play in co-op mode. Square Enix

Dying Light 2 supports 4-player co-op, so you can team up with friends to take on the zombie hordes.

This option is not available to you from the start and you must earn it. Specifically, you must complete the prologue and tutorial sections, as well as the Markers of Plague quest yourself. Gating the multiplayer component until you learn the ropes is fairly common for this type of game, as a similar approach is used by most episodes of Far Cry and Sea of ​​Thieves.

Once you’ve completed Markers of Plague (after about 90 minutes of gameplay), co-op mode will be unlocked. Unfortunately, Dying Light 2 doesn’t have a cross-play feature at launch, meaning you can only invite friends who are on the same platform as you.
How to Invite Friends to Dying Light 2 Co-op Game The image shows a screenshot of Dying Light 2. It is possible to face the hordes of undead and camps of bandits with up to four friends. Square Enix

Assuming you and your friends are all on the same console (or PC), you can invite them to help you play Dying Light 2.

To do this, start the game itself and then open the pause menu. From there, select the “Online Menu” option, which is third in the list.

Here you can calibrate various settings that determine who can and cannot join your campaign. The part you may need to change is the Game Type setting. Your options are here:

As long as you haven’t selected Single Player, you should be able to invite friends to your Dying Light 2 game using your platform’s networking tools. There is also a special “Friends” tab that you can use on Dying Light 2’s online menu page.

How to Increase Health and Stamina in Dying Light 2

At the start of Dying Light 2 you will be relatively weak and defenseless. However, you can gradually improve your health and stamina by tracking down inhibitors (there are 126 of them).

These collectibles are mostly found in GRE containers. If one is nearby, your Passkey tool will notify you. A voice notification will sound stating “Canister with Inhibitor Detected” then a small icon will appear in the lower left corner of the screen.

This also provides a range indicator, letting you know how far away the Inhibitor is and if you’re heading in the right direction.

Dying Light 2 is available now for Xbox One, Xbox Series X, PS4, PS5 and PC. A Nintendo Switch port is expected to be released later this year.

The picture shows the gameplay of Dying Light 2. The zombie game emphasizes melee combat rather than shooting, so you’ll need to stock up on inhibitors. Square Enix